The scholarship is named after Noah Dean Winstead who died on July 4th 2012 on Cherokee Lake in Tennessee as a result of Electric Shock Drowning.  Noah and his friend, Nate Lynam, both died as a result of ESD. Almost 2 years after their death, Tennessee passed the Noah Dean and Nate Act, which creates infrastructure to better protect the public in and around marinas.  The Act outlines requirements for the installation of ground fault protection in and around boat docks and marinas, authorizes the State Fire Marshal’s Office to conduct safety inspections of boat docks and marinas to ensure compliance with applicable codes, and requires marinas to post safety signage notifying individuals of the potential for electric shock if swimming within 100 yards of the boat dock.
Awareness of Electric Shock Drowning is also being spread in local and surrounding areas by the ESD billboards. 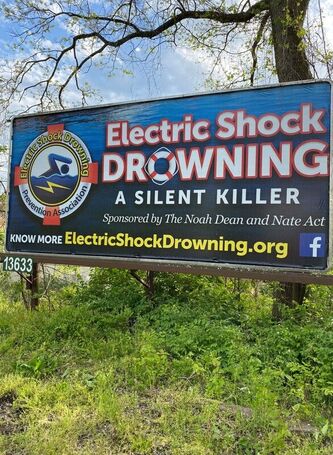